Have you ever wondered why do some Dutch ovens have legs whilst others don’t? Well, I wanted to know so I searched for the answer, and here is what I came up with.

A Dutch oven with legs is for outdoor use with coals or campfires, the legs help control the heat in the oven. They cannot be used on kitchen cooktops as the legs stop the heat from heating the Dutch oven. Using them in a conventional oven is possible just beware of the legs catching on oven shelving use extreme care.

Dutch ovens with flat bottoms came later when the Dutch oven started to be used inside the home with more modern heat sources like indoor woodfired gas and electricity.

In the 21st century, most people either have what we loosely refer to as a Camp Dutch Oven or Indoor Dutch Oven.

Typically, indoor Dutch ovens will come with a flat bottom or base. They also have a domed lid on them, which is why they are mainly used on modern stovetops and with modern heat sources.

Indoor Dutch ovens are also suitable for use on conventional oven racks.

Camp Dutch ovens, as the name would suggest, are mainly used outdoors. They are designed to be used with wood coals or charcoal. Essentially the cooking takes place over a fire.

You will almost always find this type of Dutch oven with three legs attached beneath the actual pot. That is designed to hold the pot above the coals.

The camp Dutch oven will also come with a flat lid, so you can keep coals on top of the Dutch oven and prevent ash from falling into the pot. Not only is it a flat lid but it is also a heavy lid. That ensures there is a tight seal when cooking.

Dutch ovens with legs – or camp Dutch ovens – also present a glorious opportunity for baking above the coals instead of inside a modern kitchen oven.

Having said that, it is worth stating and noting that you could actually use a Dutch oven with legs in a modern oven, by placing it on an oven tray with a baking sheet on it.

During the early years, Dutch ovens became an essential item for one group of people in particular. That would be people who were constantly on the road or nomadic people. That would include the cowboys in the United States, drovers in Australia, and the Voortrekkers in South Africa.

All three of those “peoples” were famous for their nomadic lifestyles at some point in history and all three groups have been involved in either adopting or adapting the Dutch oven and making it fit for purpose on their travels.

They aren’t the only ones though. There are examples of people like them all over the world. To some degree, the cowboys, drovers, and Voortrekkers were pioneers though.

Nevertheless, in the context of this blog, it is worth mentioning that the drovers in Australia popularised the use of the Bedourie Oven, which is a variation of the traditional Dutch oven. The Bedourie Oven comes with legs on it.

In the United States, they would use something called the camping, cowboy, or chuckwagon Dutch oven. Those always came with three legs attached.

At this juncture, it is probably worth noting that there are options available for Dutch ovens that do not come with legs. If you need to use a Dutch oven with a flat base in any of these cooking environments, you could also purchase a tripod and place that Dutch oven on – while over a fire or coals.

That tripod is also normally a cast iron tripod, which if anything promotes uniformity.

In the absence of attached Dutch oven legs or a cast iron tripod, you could also place your Dutch oven on small stones.

You would just need to make sure those stones are well balanced. In poorer communities that would be the only real option available anyway, so it definitely can be done. We suspect most scouts operating in the United States are familiar with these already.

A gas stove is a prominent heat source used for cooking in the 21st century. However, there is actually a rich cooking history there, as gas stoves were actually used as far back as the early 19th century – a period when Dutch oven cooking really started to take off.

When you visit vendors, most of them will recommend that double-enamel-coated Dutch ovens be used to cook on them.

Critically though, the surface of a gas stove is largely flat and that means you will more often than not need a flat base on your pot to cook on one.

The Dutch oven manufacturers always pride themselves on how well it distributes and retains heat while cooking. That heat distribution would not be as effective if you used a Dutch oven that had legs.

Beyond that, it simply isn’t practical to try and balance a Dutch oven with legs on a gas stove.

Dutch ovens with legs are usually larger and more cumbersome than those made for modern kitchen use. So, there is also the small matter of space to store it in the kitchen.

That said, you could get away with using a Dutch oven with legs on a gas stove. It will just likely be tricky and a tad messy even.

Cooking with a glass top is a more modern style of cooking and is very common in the 21st century. The problems it presents for Dutch ovens with legs are similar to what we have already discussed above.

It is impractical to use a Dutch oven with legs on a glass cooktop. It is also potentially dangerous…for the glass top. When you have three legs on it, the risk of cracking or breaking increases significantly.

For those who do not know, induction cooking involves the transfer of heat through a magnetic field at the bottom of a pot or a pan. This is definitely not a suitable cooking method or surface for Dutch ovens that have legs. A flat base is all that will do here.

So, with halogen cooking, you will have a halogen lamp placed under a glass plate. The heat is then transferred through that glass plate.

Again, I must stress the importance of even heat transfer and that is particularly relevant in this context. Pots with a flat base are best suited to this method of cooking. That would also rule out a Dutch oven with legs.

We are all familiar with the “traditional” electric cooktop. The ceramic cooktop is merely a modern variation of that, a progression if you will. With this form of cooking, you will normally encounter an electric coil under the ceramic top of the stove.

For heat induction and transfer purposes, a flat surface for this stovetop is most suitable. So, once again, a Dutch oven with legs will not fly when using this method of cooking.

For many, this is an outdated form of cooking because of the demands that it puts on your pockets and its performance against some of the more modern methods.

However, in developing and medium-income countries, you will probably still find them in most household kitchens. The first major adaptation made by Dutch oven manufacturers actually centered around suitability for the electric stove.

That was when the idea of a Dutch oven without legs first became relevant and popular.

Go here for a quick read about using Dutch ovens on cooktops.

Using a Dutch oven with legs is most practical when cooking with this method. It normally entails you cooking on wood coal or charcoal.

How to Cook With a Dutch Oven Outdoors

With such an in-depth “HOW TO” question an in-depth article is required and I have prepared one right here! Enjoy!

What Can I Use Instead of a Dutch Oven?

In this article, I give you 10 cooking pot alternatives you can use instead of a Dutch oven.

Why Do They Call It a Dutch Oven

I answer this question in my article here.

What’s so Great About a Dutch Oven

There are so many great uses for this relatively inexpensive cooking pot – you can read about them in my article here.

Just to name a few:-

Final Thoughts – Why Do Some Dutch Ovens Have Legs? Whilst Others Don’t?

So you see whether you use a Dutch oven with legs or not is ultimately determined by the type of heat source you plan to cook with.

This is my 14 inch Camp Chef camp Dutch oven. You will notice the 3 legs on the top of the lid. This is so you can also use the lid by standing it in coals. Mine is due for a restore and reseason 🙂

You can see a Camp Chef camp Dutch oven here at Amazon.

This is my Lodge double Dutch oven. It has a flat bottom also a deep lid with handles on either side perfect to invert for use over the oven or over the heat separately.

You can see one exactly like mine here at Amazon. 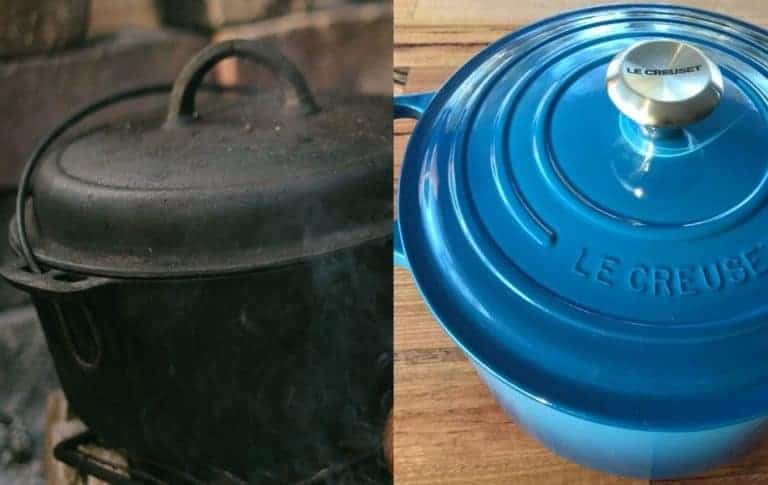 I am amazed that some people still do not know that this magnificent piece of cookware exists. So when I am asked what is a… 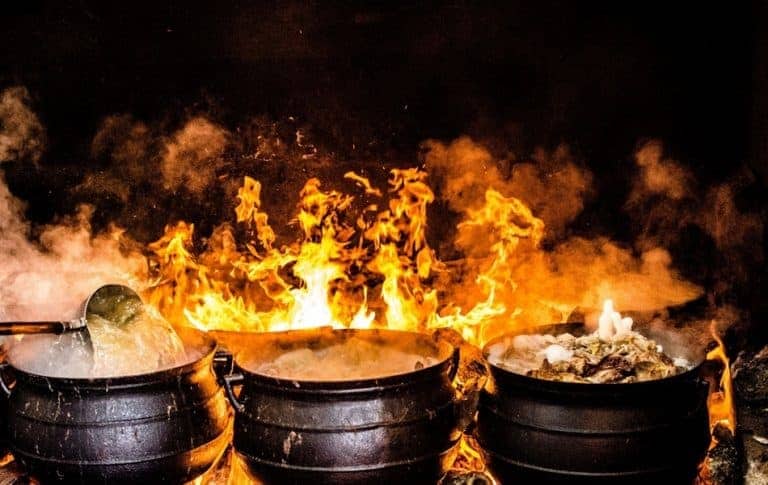 Dutch ovens have been in use for centuries to cook bread, stews, and many other delicious meals. Though they vary somewhat in size and structure… 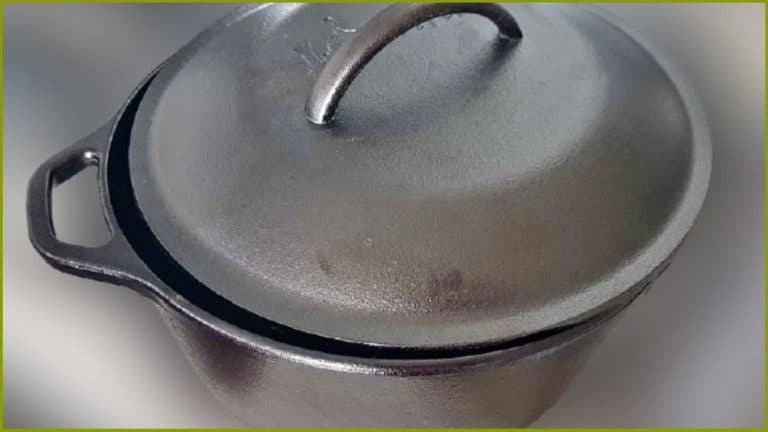 Today cast iron generally arrives “pre-seasoned”. Standards of “pre-seasoning” will vary from manufacturer to manufacturer and brand to brand. This is the really quick answer…

We all have our own criteria that need to be met when choosing the right Dutch oven. The number of people we feed regularly is… 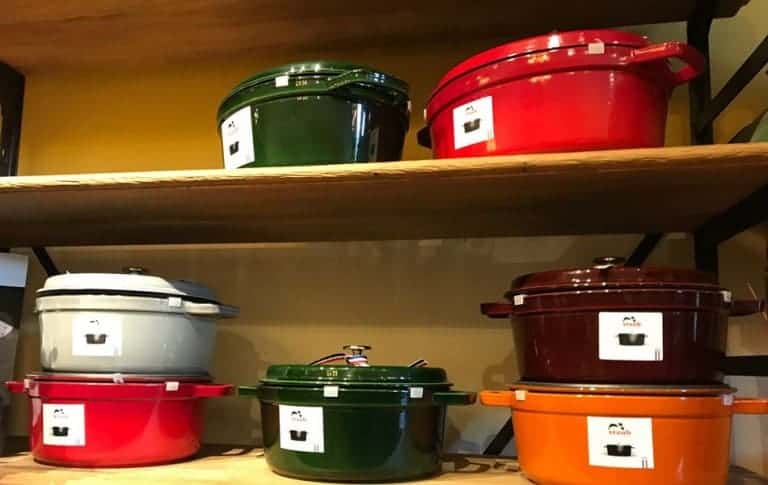 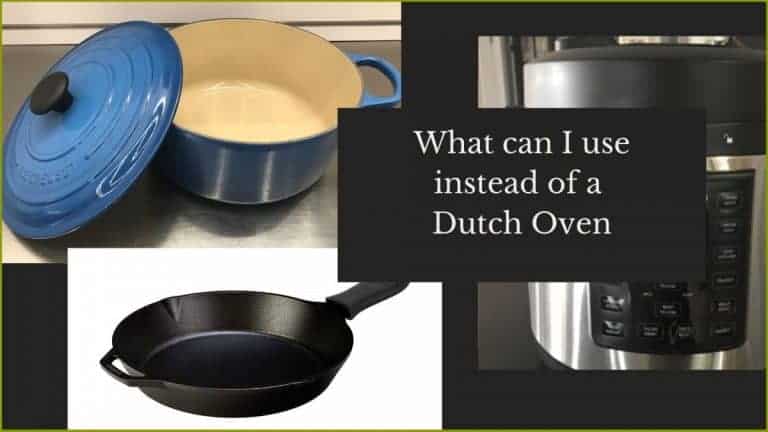