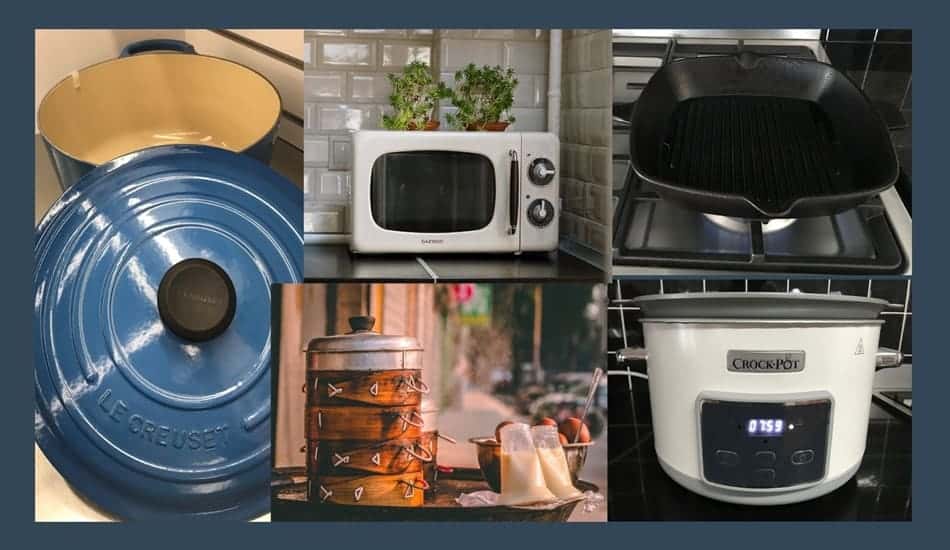 Nobody wants to cook for hours after spending a long day at work, so most people use pressure cookers, since it cuts cooking time by nearly two thirds. For example, cooking dried beans on the stove will take approximately 2 to 3 hours, but it will take you less than an hour with a pressure cooker. Despite its numerous benefits, are there alternatives to the pressure cooker?

Instead of a pressure cooker, you can use alternatives like a crock-pot, steamer, microwave, or conventional cooking. A pressure cooker is one of the most versatile kitchen devices, and there is no easy replacement for its functions. However, if you don’t have a pressure cooker, these would suffice.

How Does a Pressure Cooker Work?

When it comes to cooking food quickly, pressure cookers are very useful.

These cookers drastically cut the cooking time and make it possible to cook beans, whole grains, and even soul-warming stews on a holiday night much faster. But how does a pressure cooker work?

A pressure cooker might look like a regular pot. However, it has a modified lid that locks a rubber lining to make a seal. The seal helps to trap vapor that rises from the boiling liquid.

The cooker works by increasing the temperature of boiling water from 212°F (100°C), which is the maximum boiling point of water, to 250°F (121°C), thus reducing the cooking time.

Once the cooker has reached the maximum pressure, it indicates on a scale situated on the lid. The pressure then infuses the hot steam in the food.

The higher the pressure, the shorter the cooking time a pressure cooker will use. The only way to change the boiling water’s temperature as it changes to steam is by trapping the steam in a tightly sealed space.

As the water changes to steam, it increases in volume. Since the pressure cooker is closed, the volume is not allowed to increase; therefore, the pressure increases.

A microwave can offer a swift substitute to a pressure cooker, but it lacks versatility. Just like the name says, a microwave utilizes microwave technology to prepare food.

The microwaves produced in the microwave oven bounce back and forward and get absorbed in the food being cooked. As the food continues to absorb the microwave’s energy, it cooks through.

Some microwave models have a feature that can roast meat. You can also prepare your veggies rapidly by adding a little water for them to be steamed from the inside.

There is a popular myth that microwaves reduce food’s nutritional contents, but that is not true. Microwave ovens are entirely safe and effective for cooking.

Just like the pressure cookers, crock-pots offer you a convenient way to prepare your food.

The big difference between the two is that a crock-pot cooks food more slowly than the pressure cooker.

Slow-cookers cook food from four to ten hours. They are perfect for cooking cuts of meat that are usually very tough.

Despite the long cooking hours of the crock-pot, the food maintains its nutritional content and flavor. A slow cooker is very convenient.

You have to add all your ingredients at the same time, set it, and leave it to cook.

Avoid peeking since it easily loses heat and increases the cooking time. Just lift the lid if you want to add extra ingredients to the food.

To learn more about how to use a crock-pot, watch this video:

You can also use a steamer to prepare a variety of food and still guarantee the nutritional benefits of the food being cooked.

What’s more, you can use a steamer to prepare veggies, green beans, and stuffed food items.

Steaming is more preferred to using a pressure cooker because it helps eliminate excess fat in cooking, as it only needs hot vapor.

Steamers can be either electric or stovetop. Regardless of the type, they all utilize steam for cooking food.

Conventional Cooking on the Hob or Oven

Traditional cooking is another alternative to using pressure cookers. You can prepare food using this method.

However, it will take longer than when using a pressure cooker. Additionally, the final results are not the same. You can use a Dutch oven on the stovetop or in the oven to prepare your food.

Conventional cooking on the hob allows you to simmer, boil, sear, and soften dishes all in the same container.

The downside of conventional cooking on the hob or in the oven is that you cannot walk away. As much as it requires time to cook your food, it also needs regulation.

Read about 12 cookware alternatives in my article – here

The results are various types of pressure cookers that offer more safety and functionality.

These cookers are very loud, sounding like a whistle because they have only one pressure mode.

They have minimal safety features, making them undependable and vulnerable to blowing up in the face due to the very high pressure.

These are the newest gen cookers, and they utilize spring-loaded valves. The spring enables you to set the pressure on various points.

Unlike the first generation, second-generation pressure cookers don’t release the pressure inside the container. Instead, they only release steam when the lid is unsealed or left on the source of heat for too long.

These types of pressure cookers are equipped with advanced features, and they run on electricity.

Like the second-generation cookers, the electric pressure cookers use spring-loaded valves to regulate the pressure.

They also have computerized features that allow you to cook without much regulation of the appliance.

Some pressure cookers have single or multiple functions that offer various options.

There are two main variations of pressure cookers when it comes to their functionality, including:

Quick answers to a couple of F.A.Q.’s.

Can You Use a Slow Cooker Instead of a Pressure Cooker?

Yes you can but you cannot use the one-pot to prepare the recipe.

You will have to sear or brown meat and sauté vegetable in a separate pan before adding them to the slow cooker.

Also, the cooking time needs to be increased either 3 to 4 hours on the high slow cooker setting or 6 to 8 hours on the low slow cook setting.

What Are the Disadvantages of Pressure Cooking?

Pressure cookers have their own recipes for the following reasons, which could be deemed as disadvantages of using a pressure cooker.

The pressure cookers’ ingredients can only be filled to the maximum measure line in the internal cooking pot – as there needs to be room for the pressure to build.

Much like very early front load washers, you cannot just “open the lid of the pressure cooker” to see how the dish is cooking or to add “a little extra of this or that”.

To do this you have to depressurize the cooker check the dish and then start the process again! What cooking time would you set then???

There are certain types of food that just do not fair well in a pressure cooker such as pasta or oatmeal.

Conclusion – What Can You Use Instead of a Pressure Cooker?

All cooking appliances can help you prepare food, and they offer benefits like retaining the nutrients and flavor of the food.

However, while all other cooking appliances provide a convenient way to prepare your meal, a pressure cooker has more advantages.

It combines all the best aspects of cooking devices into a single-use and an economical machine.

Additionally, the nutritional content in the food is preserved when using a pressure cooker. The sealed unit traps everything inside that could be otherwise lost when cooking.

There could be various alternatives to a pressure cooker, but none can replace all its uses. A pressure cooker is an essential appliance to have in the kitchen.

However, if you don’t have one, you can use alternatives like a steamer, crock-pot, microwave, or cook food conventionally using a Dutch oven on a stovetop or in the oven.

The difference between Dutch ovens and pressure cookers – here

link to What Is Cast Iron Conditioner and Should I Be Using It?

A cast-iron pan, skillet, or Dutch ovens are tried and tested pieces of cookware that have been around for hundreds of years. This cookware can be used for cooking any number of dishes. They are...

Continue Reading
link to Is a Cast Iron Pan Worth It?

If you are new to the world of cast iron cookware and cooking. You would have heard all the horror stories that people have experienced when "trying" to cook with cast iron. So you want to know...

I use a cast-iron Dutch oven for outdoor cooking as well as my enamel Dutch ovens for cooking at home. For entertaining large numbers Dutch ovens are a no-brainer... Let's not forget about cooking one-pot meals in other cooking pots such as multi-purpose cookers, slow cookers, rice cookers, braisers, and the list goes on.

Determining what types of food you like to cook then getting and using your preferred type of one-pot cooking pot over and over will make your life so much easier. Just get those healthy hearty meals prepared, cooked, and enjoyed...

OVENSPOT is a participant in the Amazon Services LLC Associates Program, an affiliate advertising program designed to provide a means for sites to earn advertising fees by advertising and linking to Amazon.com. Amazon and the Amazon Logo are Trademarks of Amazon.com, Inc. or its affiliates." This site also participates in other Affiliate Programs and is compensated for referring traffic and business to these companies.

Any cookies that may not be particularly necessary for the website to function and is used specifically to collect user personal data via analytics, ads, other embedded contents are termed as non-necessary cookies. It is mandatory to procure user consent prior to running these cookies on your website.