Professional chefs use cast iron due to its many advantages. Besides being durable and inexpensive, cast iron pans and pots are easy to clean and great at heat retention. These features allow chefs to whip up several meals, especially those that need low simmering and browning to prepare.

Curious to learn more about cast iron cookware? Read on as we discuss the main features, pros, and cons of cast iron, and why chefs have at least one cast-iron skillet in their kitchen arsenal.

Why Is Cast Iron Cookware Popular?

Cast iron cookware is well-reputed for its heavy-duty properties. Cast iron is best defined as iron-carbon alloys that contain more than 2% carbon content.

The alloy constituents give cast iron a fairly low melting temperature, making it possible to use cast iron cookware at extremely high temperatures.

However, the most commonly used cast iron cookware are pans and skillets.

Despite not being ideal for preparing all recipes, cast iron has several benefits, as discussed below.

In a discussion about cast iron, renowned New York Chef Frank Prisinzano admitted that pans made from cast iron are known for their nostalgia, which arises when these pans are handed down from one generation to the next.

Put simply, you won’t ever need to replace a cast-iron skillet once you buy one. The presence of cast iron makes pans and other kitchen equipment resistant to gradual tear and wear.

Therefore, with a cast iron pan by your side, you can comfortably prepare hundreds if not thousands of recipes without having to worry about making a replacement.

Did you know that you can use your cast-iron skillet for searing, roasting, broiling, braising, sautéing, and even baking?

Alan Ducasse, a highly respected chef, admitted that versatility is always welcome in the kitchen, especially in busy restaurants.

In a home setting, a cast iron pan can help you save not only on space but also on money since you can easily prepare several recipes without purchasing new cookware.

It’s hard to find cookware that can handle extreme amounts of heat, similar to cast iron pans and pots.

Some restaurants also serve clients with cast iron pans due to their incredible heat retention capabilities.

Compared to other cooking utensils, cast iron is fairly easy to clean. In fact, seasoned cast iron pans should not be cleaned with soap (unless you plan on drying afterward).

To clean cooking pots or pans made from cast iron, all you’ll need to do is rinse the pan in hot water, scrubbing gently (or vigorously) with a brush until the surface is clean.

And in case you’re dealing with those stubborn foods that stick to the surface, the trick is to boil water in the skillet and allow it to stand for 15-20 minutes.

Afterward, rinse the skillet in running water and dry it.

Disclaimer, since cast iron pans and pots are highly susceptible to rust, towel-drying them immediately after use is highly recommended.

You can even take cast iron-drying a notch further by placing it over low heat on your stove to allow it to dry completely.

Easy to Season and Re-season

Over time, it’s normal for cast iron pans to lose their shine. And once cast iron starts to fade, chances are food will start sticking sooner rather than later. The good news, however, is that cast iron is easy to re-season.

All you’ll need to do is clean the pan, dry it well, season with oil and place it upside down in a preheated oven.

Allow the pan to ‘bake’ for anywhere between an hour to two before turning off the oven. Let the pan cool on its own before removing it from the oven and using it.

But you won’t need to re-season your cast iron pan often since it seasons itself every time you put it to use.

So, to maintain the non-stick properties of your cast iron cookware, you’ll need to cook with it regularly and prevent it from self-drying whenever it’s exposed to moisture.

Here are some of the best cast-iron pans available in the market:

This cast-iron skillet measures 10.25″ and comes with a sturdy assist handle to give you better control when preparing meals.

Manufactured by Lodge Cast Iron, this cast-iron skillet comes pre-seasoned with natural vegetable oil, which allows for immediate use.

The Lodge Pre-seasoned cast-iron skillet is highly versatile since it can be used on the stove, in the oven, on the grill, or even over a campfire.

This heavyweight skillet comes with a high-quality enamel interior (black) that is well optimized for even heat distribution.

The enamel interior resists dulling and staining, allowing you to use the skillet for decades.

Another great feature is the large loop handle that makes it easy to lift and grip the pan when wearing oven mitts.

Le Creuset’s cookware has lids that are interchangeable between pots and pans for the owner’s convenience.

Manufactured by Finex, this pan is highly versatile and can be used for open-flame cooking and even grilling.

The presence of a speed cool handle allows you to hold the pan for longer and even pass it across the table when dining.

The handle also contains a stainless steel coiled spring that prevents heat from dispersing to the handle.

The thick walls and base allow for better heat retention and dispersion while the patented octagonal design makes it easy to pour food from the pan.

Here are some of the frequently asked questions about cast iron:

Cast iron doesn’t distribute heat evenly despite its thickness. Cold spots are likely to occur if you use a cast iron pan without prior heating.

Therefore, to prevent uneven heating, be sure to place your cast iron in the oven or on the stovetop to preheat before usage.

Can Traces of Iron Get Into Food Prepared Inside Cast Iron Pans?

Traces of iron can get inside your food if you cook acidic foods in cast iron pans. Acidic foods like a tomato paste can wear down seasoning, leading to iron absorption in the food itself.

Professional chefs avoid using cast iron when preparing acidic recipes that could absorb the iron. Due to this, it is advisable to stay away from vinegar, tomato sauce, and lemon-based sauces when using cast iron.

Is My Rusty Cast Iron Ruined?

Rust is a sign that your cast iron cookware needs seasoning, so you shouldn’t throw it away just yet! Luckily, there are several ways to get your cast-iron skillet back in shape.

Besides cleaning and heating your pan in an oven (as discussed earlier), you can also pour a mixture of water and coarsely ground salt on a paper towel and rub the surface.

Rubbing the surface with steel wool is another way to remove rust from cast iron.

In case you want to use cast iron to roast your veggies or char your meat, remember to give it a couple of minutes to absorb heat.

Cast iron isn’t too good at distributing heat, so you’ll need to preheat it to avoid cold spots. 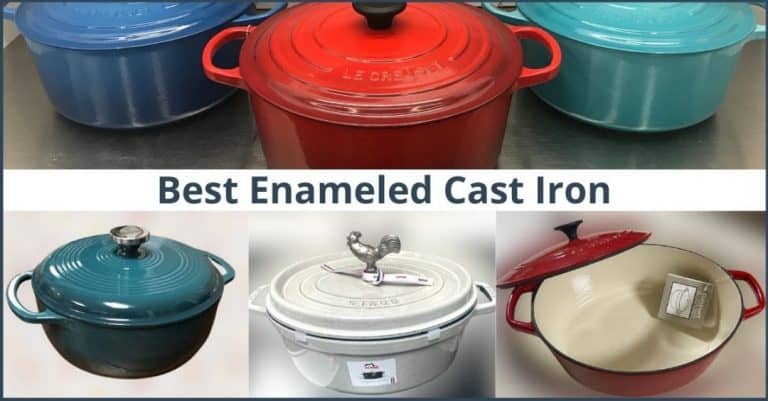 You’ve heard of cast iron skillets, pans, and Dutch ovens, but what about enameled cast iron? Known as enameled cast-iron cookware it is a type… 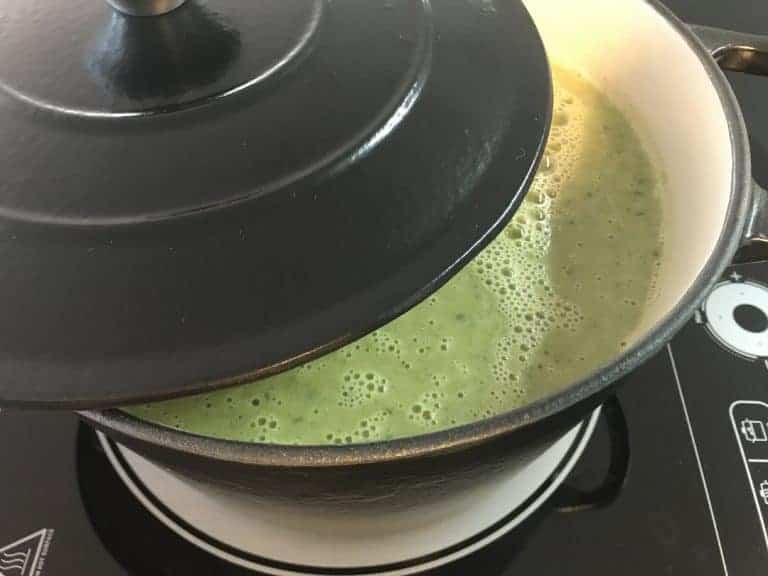 More and more people are learning about the superior cooking technology of induction burners. The burners use magnetic currents to heat pots and pans, rather… 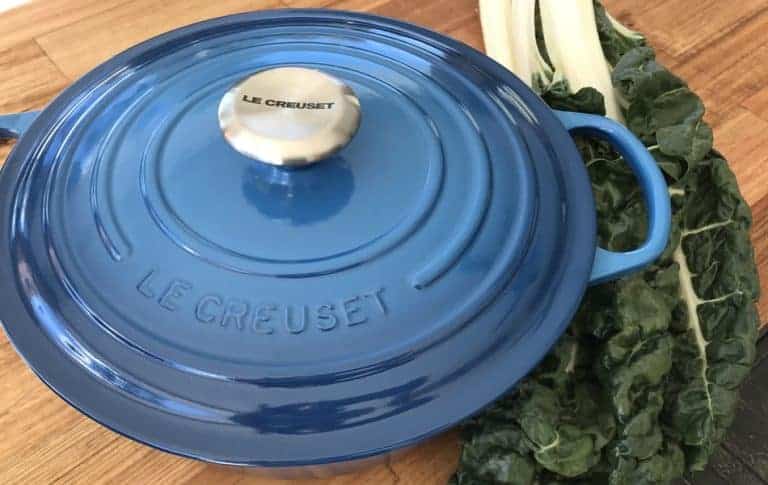 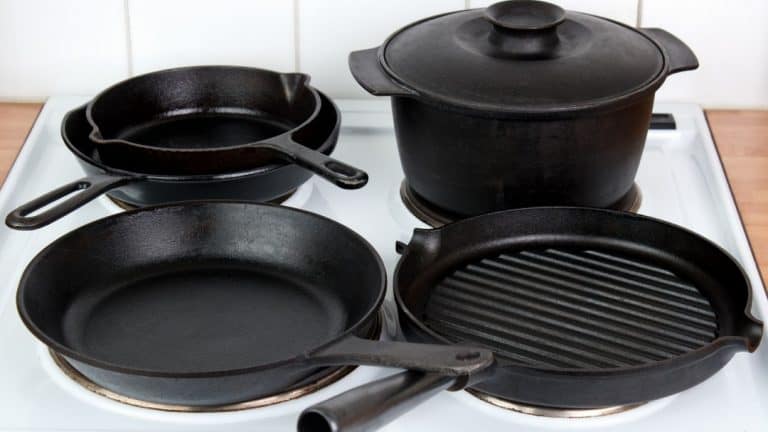 Seasoning cast iron cookware is an essential part of owning this highly durable cookware. It creates a natural non-stick surface and even adds a bit… 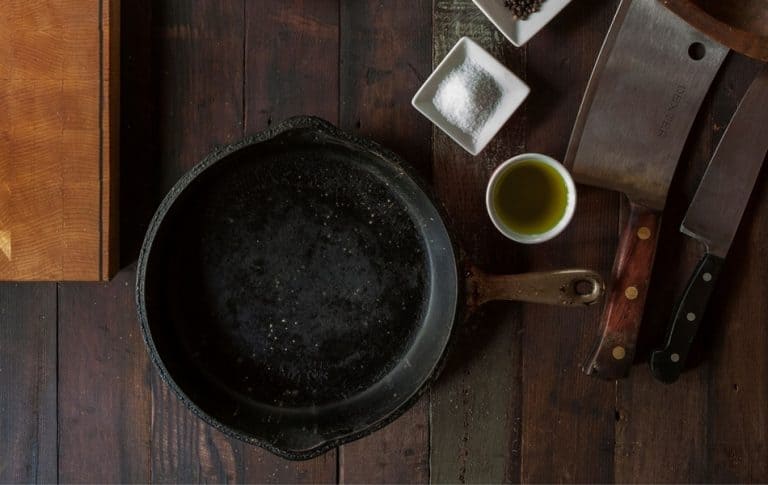 Have you ever wondered what cast iron cookware is? You may have heard more about this type of cookware over the last few years. Part…